See No Evil, My Pretty Lady 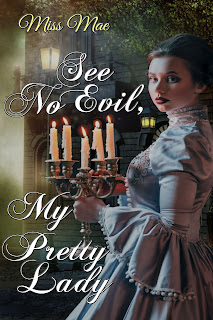 Available in digital download at Smashwords, Barnes & Noble, and Apple/iTunes.
In print at Amazon,
NOW IN AUDIO (with new Cover) at Audible and at iTunes

New maid Dorcy Edwards flees the scene of where her employer's body is found. His murder sparks a chain of macabre events. Cloistered on a remote island with five strangers, including Gareth Davenport, her late employer's brooding, but darkly handsome heir, Dorcy encounters baffling questions with what she fears may be terrifying answers. Who cut the telegraph lines? Who left a mutilated animal carcass outside her bedroom door? What is the reason for Gareth's black gloves and eye patch? Can he be "Jack the Ripper", the madman suspected to be Mr. Davenport's killer? Dorcy must solve the mystery, and soon, or her growing attraction for Gareth could be her very death sentence.

Winner of the Top Ten Read of 2008 from MyShelf.com

Dorcy rushed through the doorway, grabbing the hand railing to keep from falling down the slippery steps. Swirling fog cocooned her, the impenetrable moisture abruptly halting her frenzied flight.

The scream resonated long and loud inside her mind. With stunning clarity the image she’d seen rammed into her consciousness—a figure sprawled on the library floor, white shirt soaked with blood, the hilt of a knife stuck in his belly.

Numb with shock, she stood unmoving as the air erupted with noise. Hooves clattering against the cobble-stoned street signaled an approaching rider. Through a parting in the shifting fog she stared toward the corner gas lamp. Beneath its arcing light trotted a snorting gelding, a shrunken visage of a man hunched over the animal’s neck.

“A body’s been found in Mitre Square.” Raising his prune wrinkled face, the old man shrilled out his warning. “Lock yer doors. Stay inside.”

He spurred the horse down the street and the pair disappeared into the mist. His high, thin cry merged with the fading echo of the steed’s departing hoof beats.

Dorcy inhaled a shuddering breath, the sudden odor of human body sweat alerting her to someone’s presence. A deep, unfamiliar voice said, “Madame, I have some business with you.”

Gasping, she whirled to flee. But a strong hand gripped her arm and flung her against the wall of the house. Knocked breathless, she opened her mouth to scream.

“Oh no, my pretty lady.” Vise-like fingers clamped on her throat, preventing sound. “I think you’ll be telling no one that you saw me.”