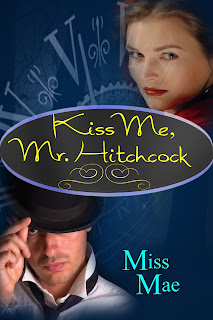 Available in digital at Smashwords, B&N, and Apple/iTunes.
In print at Amazon.

What's a girl got to do to get a guy to kiss her?
A guy who's new in town.
Who flashes a practiced lady-killer smile.
Who drives a dashing Porsche.
Maybe she shouldn't confront him with a baseball bat.
Or get herself locked with him in a library basement.
Or get him involved in a feud with an old boyfriend.
But then again, maybe she should.

Mona didn’t catch on immediately to what had happened until Preston hurried to the door and tried the knob. As abruptly as it had started, the music cut off. Preston swiveled around, his alert gaze bouncing off hers before he swept his about the room.

Removing her fingers out of her ears, she asked, “What’s going on?” It startled her to hear the tremor that cracked her voice.

“There’re no windows.” Preston moved to the nearest stack of boxes, asking over his shoulder, “Do you know if there’s an exit door?”

She gestured at the door they’d just used. “But this—”

The muscles between her shoulder blades knotted. She hugged her arms over her chest in an effort to control a mounting urge to break into shakes.

“Help me look for something—a hammer or a wrench—that I can use to bust the knob off.” Preston yanked at a file cabinet, the rusty drawer screeching in protest. Pain exploded inside Mona’s head like a hundred firecrackers. Moaning, she clapped her hands to her ears.

He rummaged through the mildewed papers, mushrooming a cloud of dust particles. Coughing, he stepped back, waving his hand to clear the air. Slowly, Mona uncovered her ears, clutching at a table as she wobbled on unsteady legs.

“Sorry. Guess that was like nails scratching down a blackboard.” He strode to the far wall, scooting two boxes out of his way. “What are you doing here?”

She inhaled a shallow breath, swallowing down nausea. “I wondered why you came here when Miss Flowers locks up at noon.”

“Maybe this will teach you not to be so curious.” In an absent-minded voice, he added, “But I got a message at the office. I was to meet with someone who’d give me the lowdown about that reckless driver in the Porsche.”

“Really.” Hands planted on hips, he tilted his head back to survey the ceiling with a thoughtful eye. “But it’s obvious I was set up.”

“Set up? Who--?” She didn’t want to finish the question, but Preston did. “Yeah. This room’s got to connect with another one somehow because the caller had to be there waiting. And as soon as I stepped foot inside here, he knew it and bolted the door.” He gave her a direct look. “I think we both know who drowns himself in Old Spice.”

“David’s not vindictive.” An old sense of loyalty drove the need to defend her ex-boyfriend. “I can’t imagine him—”

“Well, you’re sure not imagining being stuck here, lady. It’s real.” He pushed aside a box on a table and climbed atop. “Maybe if we stack some boxes on this table, I can reach the ceiling and kick in enough space to crawl through. Are you able to lift any of those on the floor?”

“But all we need to do is wait for Miss Flowers to return from lunch.”

“Mona.” He scowled in impatience. “Do you get the impression she makes regular visits down here? Hell, no. We’re on our own.”

She gasped, the hairs on her neck electrifying. “What’s that?”

“Where?” Preston followed the direction of her pointing finger, whipping his gaze toward the overhead heating pipes. A vapor of steam snaked through a joint, followed quickly by another. A small cloud formed, rising and spreading along the ceiling.

“The radiators have been cranked up.” Mona blinked in alarm. Mounting pressure rattled the pipes, the escaping steam hissing like an unattended teakettle. Sticky moistness saturated the air, and water droplets beaded on her exposed skin.

“We have to get out of here.” Determination hardened Preston’s face.

*Book Cover and Title Has Changed Since Date of Video*