I am thrilled today to present on Doggy Tales an adorable guy that I ran across quite by accident on FaceBook. This is Disco the parakeet. (permission granted to use photos and videos) 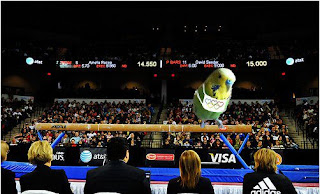 Though he's a different color, Disco so reminds me of our very own parakeet, Skipper, that lived with us many years ago. Sadly, video recorders weren't as common then (or as affordable!) and we never had a chance to tape his wonderful personality and unique vocabulary.

Look at this fabulous video of Disco speaking to his Daddy.


Thanks to Disco's human mom for the bio:

"Disco is a 2-year old parakeet from Rochester, NY. He lives with his family of three people and one very loud miniature schnauzer, Freddie. Disco joined his family at the age of 4 months, and spoke his first phrase -- “pretty bird” -- just three weeks later. Disco now says more than 60 phrases, and not just in English. Disco can quote John F. Kennedy in German, can tell you he loves you in Swedish and plans on learning many more tongues. Besides mimicking human language, Disco enjoys barking, meowing, snoring and beat boxing. Disco leads a very active social life thanks to social networking. He has over 700 followers on Twitter and YouTube and 5,000 fans on Facebook."

Thank you Disco for visiting Doggy Tales today. 'That's bird to your mother'.


***********************************
REMEMBER: Doggy Tales is Reader Contributed. If you have, or have had, a finned, feathered, or furry friend you were fortunate enough to share your life with, we want to hear about it! Leave a comment here with an addy where I can contact you, or click the FaceBook link on the right hand side and PM me. Your article will be featured in a future Monday segment.

Oh my gosh, I couldn't stop laughing! The funniest part was how he jumps from one phrase to another! Definitely sharing this one!

Thanks so much, Donna. The world needs to learn about this sweet fellow. He'll brighten up anyone's day! :)

That's an amazing bird. I bet there are no secrets in their house.

LOL, Gail, are you accusing Disco of being a stool PIGEON??? hee hee

I am speechless. I never ever knew a bird could do this. Amazing doesn't describe it. I'm going to follow him on FB, for sure.
Thank you for making my day.
Patti

Amazing little parakeet! No wonder he has so many followers. Does this little bird also do the macarina? (Hope that's spelled right.)

Loved the post. What a talkative fellow! So, he's a Rolling Stones fan. lol

You need to go to FB and watch more of his videos, especially the one of, "Where's the beef?" Disco is a STAR!!! :)

Laurie, you were able to view him??? Excellent!!! :) Yes, Disco also dances. LOL (he ain't called Disco for nuthin'!) LOL

LOL, but I'm not quite believing Disco really doesn't get "no satisfaction", do you??? :)

Thanks so much for stopping by! :)

Fun story. Thanks for sharing!

Amazing vocabulary! Definitely my smile of the day. Thanks for letting us meet Disco.
Becca

Miss Mae, How adorable! I had a Sun Conure for years! Birds are such a delight!
Thanks for sharing and bringing back some fond memories for me! :)

What an intelligent bird. Did the officer ever tell the bird what the problem was? Disco uses better grammar than I do. Would he be a beta reader for me in my novels?

Parakeets are adorable and beautiful. I've had several and tried to teach them to talk but never had any success. Lovely and cheerful blog, Mae.

Oh, you humans! You're so kind! Can you tell we have a very fun time at our house?I mean, we're not just talkin' crackers chez Disco!