Doggy Tales -- The Story of Jack

Thanks to Patricia Yager Delagrange for her contribution! 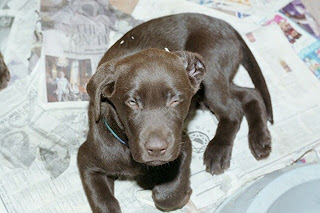 Our chocolate lab, Annabella, was pregnant and two weeks before she was to give birth I found her hiding on our bed in the dark in the middle of the afternoon.  Something was wrong.  I called the vet who told me to take her temperature.  It was already 105.  She had to have x-rays to see what was going on.
I went to a specialized vet hospital about 40 minutes from home that had fifteen or more veterinarians, one who specialized in pregnant dogs and puppies.  She called me at 11 p.m. that evening and said one of the pups was dead and was poisoning Annabella.  Did I want to pay for exploratory surgery and a c-section, and if so, did I want to save the pups or save Annabella.  My instant answer was save mom and do the best you can with the puppies.
Two hours later Annabella had had a hysterectomy and given birth to five live pups out of eight - all premature, needing to be fed every two hours except during the wee hours of the night when they slept.
So began my (since no one else in the family could figure it out) journey of feeding five hand-size pups every two hours throughout the day. By the time I was finished feeding the five of them, I'd have a half-hour reprieve before I had to start all over again. And so it went for several weeks. I had to weigh them every morning to make sure none was losing weight. 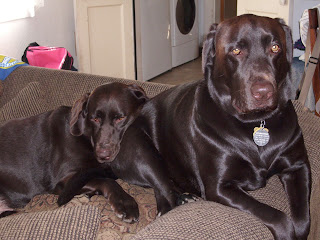 Several weeks later and all the pups seemed to be thriving.  Until one of them (they were not named, but each had a different colored string around its neck) started acting funny, lethargic, not eating, one of his eyes started drooping, the top of his head seemed to be expanding and contracting.  This was not good.
Thousands of dollars later - still no diagnosis and my husband was talking about maybe putting him down.
No way.  Until we had a diagnosis, Jack (we’d named him Jack after One-Eyed Jack because of his drooping eye) was staying alive.
Days later, the vet called and said the radiologist had studied this condition in vet school but never seen it manifested in a real dog.  Jack had cranial mandibular osteopathy - a rare condition wherein his jawbone grew a golfball-sized lump under his chin.
Good news - it was a self-limiting condition, not life-threatening, and should stop soon.  Until that time we administered pain meds here at home.
Jack made it through and is a happy puppy STILL at five years old.  And the love of my life.  He weighs 100 pounds and loves to sit in my lap and nibble on my ears.
********************************
REMEMBER: Doggy Tales is Reader Contributed. If you have, or have had, a finned, feathered, or furry friend you were fortunate enough to share your life with, we want to hear about it! Leave a comment here with an addy where I can contact you, or click the FaceBook link on the right hand side and PM me. Your article will be featured in a future Monday segment.

What a wonderful story. Yes, we will do anything to save our pets. Dogs are wonderful, caring and give unconditional love. My hat is off to you for caring for your dogs. Larry

Thank you, Larry, for being one of those people who believe in treating animals with love and care.
Patti

Nice, heartwarming story, Patrica! My first lab Kachina lost her mom because her uterus burst giving birth to 12 puppies. The kennel owner did exactly the same thing as you, and eventually found a surrogate mother to help with the feedings. We thought what an awesome person to take care of so many puppies! Now I know of two awesome people! Cheers to you and Jack!

My goodness, I glad these dogs had you to take care of them. I'm sure they love you to pieces.
I once had a pregnant stray dog, but we didn't even know she was pregnant. She gave birth to two dead puppies, and it was so sad. She kept licking them as though she was trying to get them to live. We had to take her away from them. She was so unhappy it took a while for us to get her out from under the bed. She did rally though and lived to be nineteen years old as best we could tell from the vet estimating her age when we found her.
Thanks for sharing your touching story.

This made me smile. I avoid sad animal stories because they make me cry and tough girls aren't supposed to cry. But this one warmed my heart. You've got a lot of goodness in you, Patti.

fOIS In The City said...

Patti, my mom would say that you were a direct descendent of St. Francis of Assisi, the Catholic Patron Saint of animals :) This is your calling and a blessed gift you share. The dog stories, that great horse, all the animal posts on your blog. How tender is your heart, girl !!

Good for Jack, and good for you for having the kind heart and perseverance to see him through the ordeal. A life lesson for pets and people.

Annabella and Jack are two blessed dogs. Not to mention the other four puppies.

Patricia, I admire your dedication and gift of nurturing. Nothing like a mother's love and tenderness to heal babies.

Thank you for not giving up on any of the dogs.The world needs more folks like you.

Aww, I'm glad Jack made it through! Both doggies are so pretty!